Can I repair my microwave with a PLA part?

The turntable support part in my microwave has broken. It is a three armed part, with small wheels at the end of each arm. 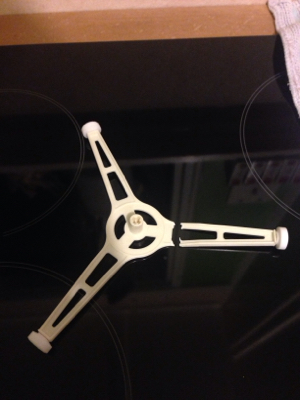 I'm confident I could print a replacement, and reuse the existing wheels (since they can be removed).

The heat of the food would be unlikely to conduct through to the PLA, but I'm concerned that it might get heated up by the microwave radiation. I can't find any clear information online about whether PLA absorbs microwaves, or if it is in any other way unsuitable for this.

Will this be a disaster, or should I give it a go?

I would say PLA itself should not be heated up by microwave. It's because microwave oven creates oscilations which excites water particles (see microwave explanation here) so assuming PLA doesn't contain water, it won't heat up. (removed to not mislead as the water is not only material which heats up by microwaves. Thanx to Tom van der Zanden for being vigilant)

But as usual, it's more complicated.

First. PLA can contain water as while producing it can be cooled down in water bath. Of course well made PLA will have as less water as possible as water has an influence on printing process.

Second. PLA is absorbing humidity so in fact it gets water inside right from the air. This unfortunately causes problems in microwave oven.

Water can be overheated and oven can overheat water above 100C. But even at 100C, PLA will not be hard anymore so your 3 arm star would "collapse". Wheels could get oval or start sticking to their axis.

Eventually if high power is delivered to very "wet" PLA, I think it can... well maybe not explode but break.

Will it be a disaster?

In my opinion it will work only for short uses of MW. Heating up a glass of milk or so. But for longer sessions when there will be much more heat (out of heating dish) it won't work.

Inspite that it's not a good idea to run MW without "proper-absorber" this little test confirmes my suspisious - short sessions are ok.

1
Printing a CV joint
1
Is it possible to use an aftermarket controller on a MakerBot?
1
Power Over Ethernet (Pi Zero Mod)
1
Is a heated bed necessary if printing with PLA?
1
3D printing filament resistant to steam