Would 3D printing multiple copies at once saves time?

I am wondering - of course if the 3D printer's bed big enough - printing multiple copies of the same print could save me significant amount of time in a small production line, excluding minor wastage such as setup time, post-processing time, etc. 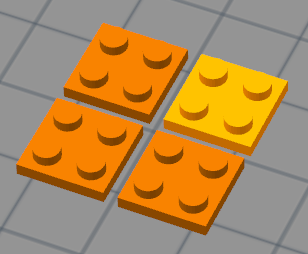 e.g. if my foo print takes 10 hours, printing 2x copies at the same time would take 2x times more, increasing linearly or it would be significantly less?

The proportion of production improvement is dependent on the size of the items being printed, generally speaking. Unfortunately, it's variable enough to make a precise answer difficult.

Consider a single unit print. I'll use my printer as an example. Other printers may have similar sequences. The print is begun and the bed has to heat up to temperature. Once the set level is reached, the print head(s) also have to reach temperature. Ignoring for the moment the print duration, one then considers that the printer bed has to cool to release the print.

If you have ten items to print, you gain nine times the above elapsed time. That can be a substantial portion of production time.

On the flip side, there isn't going to be much benefit in time from ten prints opposed to one. You may lose some post-processing time if you have stringing between the items.

Directly related to quantity printing is yet another complication. If you have a single print fail, you've lost that time. As an example, one print may take 18 minutes. Twelve minutes into the print, you have a nozzle clog and have to abort the job. That's an unfortunate loss.

With ten prints on the bed, you are two hours into the print and have a failure. Much worse loss of time and productivity.

Obviously, one would prefer to have a properly fully working printer and be able to operate with the confidence that these failures won't appear.

Hobby grade printers can't provide that level of confidence, but industrial/commercial grade printers should, further improving the productivity time for printing multiple items on a bed.

If you have hot-swappable print beds, maybe combined with the ability to pre-heat the incoming bed, you gain time-wise. I don't know enough of the commercial grade printers to suggest that such a feature exists. My printer bed is attached with magnets and could be hot-swapped if I exercised care. The bed would begin to cool quickly, making a pre-heated plate all the more valuable. I'll just print multiple items and hope for the best, instead.

1
How do you make sure you have the right voltage on the trimpots on an A4988 stepper driver?
1
How to debond cyanoacrylate glue from pla
1
How can I avoid that a small bit of filament sticks out of the nozzle during heating?
1
Converting symbols to 3d for disability purposes
1
Do all 3D printers allow the printing of flexible material?