Is it a good idea to include thermal fuses in a DIY 3D printer design?

3D printing should be relatively safe, however, the inherent nature of 3D printers, with all of the heated parts, constitutes a fire risk. A well designed 3D printer should be designed to be as safe as possible, especially one used in the home... Yes, the recommendation is, when printing, to watch the 3D printer at all times and never leave a print unattended. However, with some print times lasting hours and days, this is not always feasible, nor practical. So, some inbuilt safety features should be included, to at least mitigate the risk of fire, to some extent. 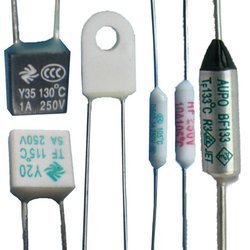 I have recently found myself having to repair rice cookers and fans in Thailand. In those, it is very often the thermal fuse that requires replacing, as they have blown before the device got hot enough to start a fire. This got me thinking about their use in a 3D printer.

1 We are not talking about the standard, replaceable, thermo-fuse, which blow upon a current surge, short-circuit, etc. These are thermal fuses that contain metal connector within them that melts (permanently) at a specific temperature (typically ~135°C), thereby breaking the circuit.

2 Would a thermal fuse be preferable to thermal cut offs, in the case of fire?

3 The thermal fuses used in rice cookers are the axial type, and in the motors of fans are the radial type.

I have a Thing-O-Matic which included a thermal fuse above the heat break.

For my home-brew printer (a large delta machine) I have a smoke alarm and a fire alarm mounted under the top of the print volume. These are wired together and give me a NO and NC dry contact. My plan is to connect this to a power kill circuit. I haven't found a good way to flood the entire machine, including the electronics, with CO2 gas or another extinguisher when the alarm sounds.

1
How to automate printing of multiple parts continuously?
1
Solidoodle 4 voltage requirements
1
MOSFET problems!
1
Print Nozzle Dragging and Smearing Filament while Printing
1
Does Cura have an algorithm for any infill percentage or does it just have specific patterns?