What do you do If the whole extruder is clogged?

I have a prusa 13 that's shipping in the mail, and I intend to make good use of it, one also own a da vinci jr. and the one time it got so clogged that the extruder itself was filled with pla, with that said I replace the extruder, for the da vinci, but besides that, as for my a prusa, what should I do if the extruder, not the nozzle gets clogged that badly?

The heat sink is a finned assembly, usually cylindrical, sometimes other shapes. Attached below that will be a threaded coupling called a heat break. Both the heat sink and heat break will be configured to have the same inside diameter, to allow the filament to pass through to the next stage.

If your nozzle is not blocked, but there is a blockage somewhere else, it would indicate that the PTFE tubing has become damaged or a piece of debris has managed to fall into the opening when filament was removed.

The items are easily disassembled and the pathway for the filament can be cleared with a suitable tool.

If a portion of the extruder assembly has previously filled with filament, the nozzle was not solidly secured to the heat break, or the PTFE filament had slipped back or was not fully inserted into the heat sink. 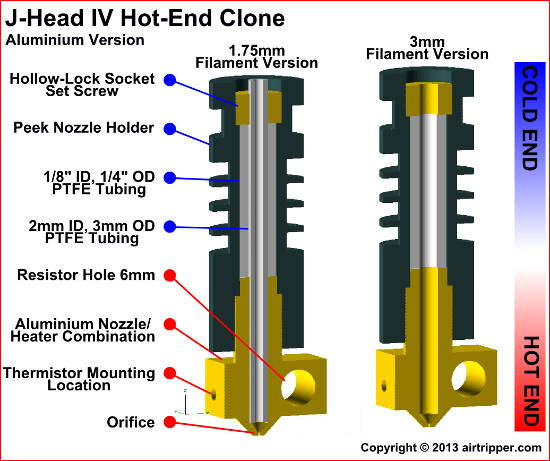 1
Power Supply Safety
1
3d Key not strong enough
1
Pronterface won't connect to my Anycubic Kossel Linear Plus
1
I am looking for the aluminum profile parts specs for this prusa i3 printer?
1
Is there a table or list of tare weights of empty spools of various manufacturers?